Axel, founder of Plantsome, actually didn’t want to have anything to do with plants. His parents have their own nursery and in contrast to his brother, Thom, he didn’t want to be the next in line to run it. Axel wanted to work at a big corporation but while studying business administration he discovered that this life wasn’t for him and decided starting his own business would suit him better.

“A professor told me this: ‘as an entrepreneur, you have to always be on the look-out for what you can do better than those around you’,” says Axel, “and for me that was plants and digitalisation.” “Because I could give plants a new look, a new attitude, they immediately became cool to me,” he adds. And that’s how Plantsome, a webshop for plants, came about: on the one hand to rescue plants from their dull image and on the other to improve the experience with plants. “There are lots of issues when it comes to people and plants. Many people have inferiority complexes because they can’t seem to keep their plants alive while in reality keeping them amongst the living isn’t all that difficult.”

“Because I could give plants a new look, a new attitude, they immediately became cool to me.” 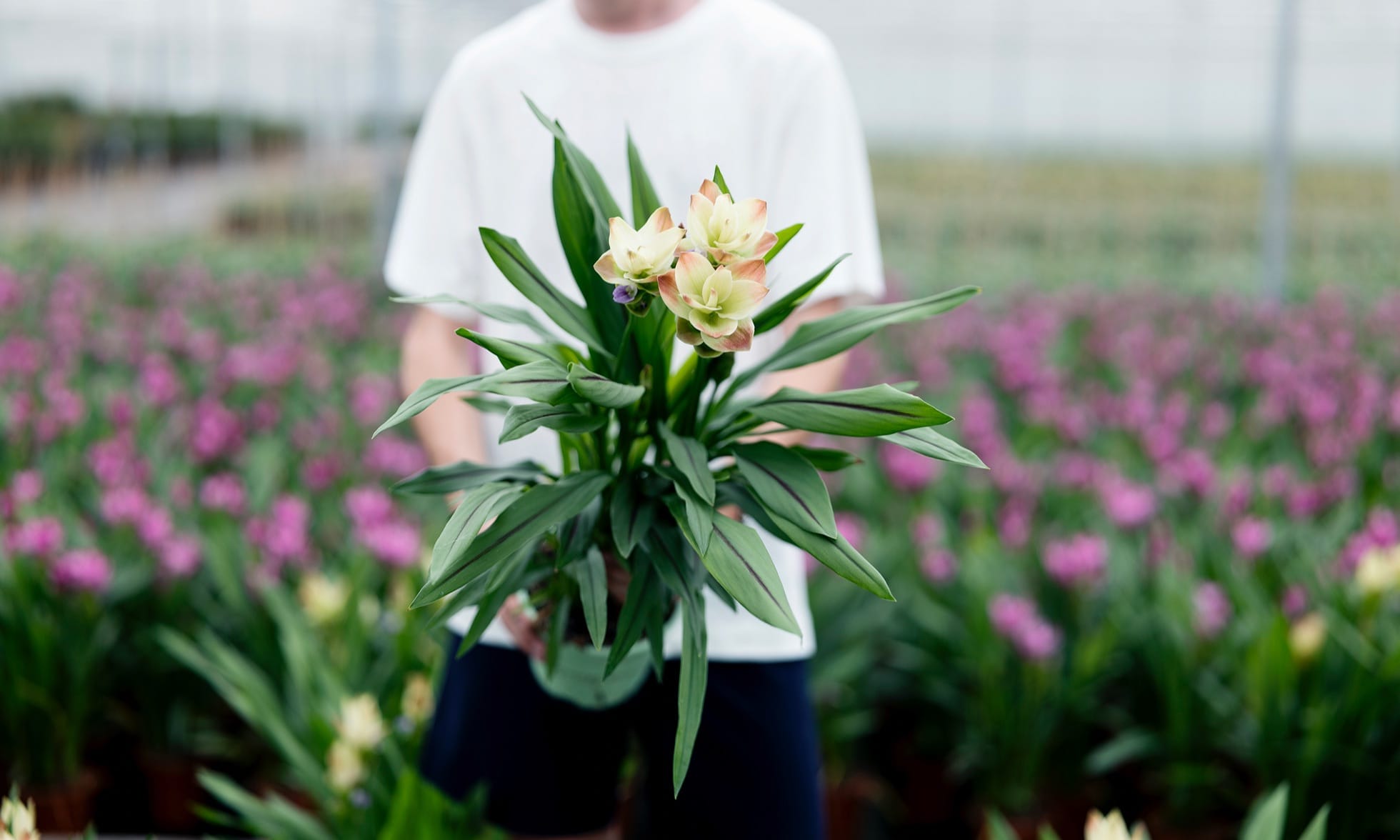 “The type of plants we carry are made to survive in the living room as long as you don’t put it right in front of the heater or in the full-on sun, or give it three litres of water every day,” Axel points out. Axel saw that not only the maintenance part of plants was a challenge, but the selecting and buying parts were as well. “If you’re at one of those big home and garden centres, you’re just overwhelmed with choices, you don’t have the faintest idea of which type of plant will work for you and getting advice about this often leaves something to be desired. And if you do get a plant, you still have to find a way to get it home,” says Axel.

A webshop provides the perfect solution for this type of situation. You can look at what type of plant works for you and then get it delivered to your door. But Plantsome doesn’t stop there: “We don’t have any control over what happens after payment, but since we want to offer the best user experience we try to influence some of what goes on here, which is why we created our app. With the app you can care for your plants. You tell the app where you live, plant size, and how far it is from the window, and then you get messages based on the local weather and you can water your plants without having to think about it.” 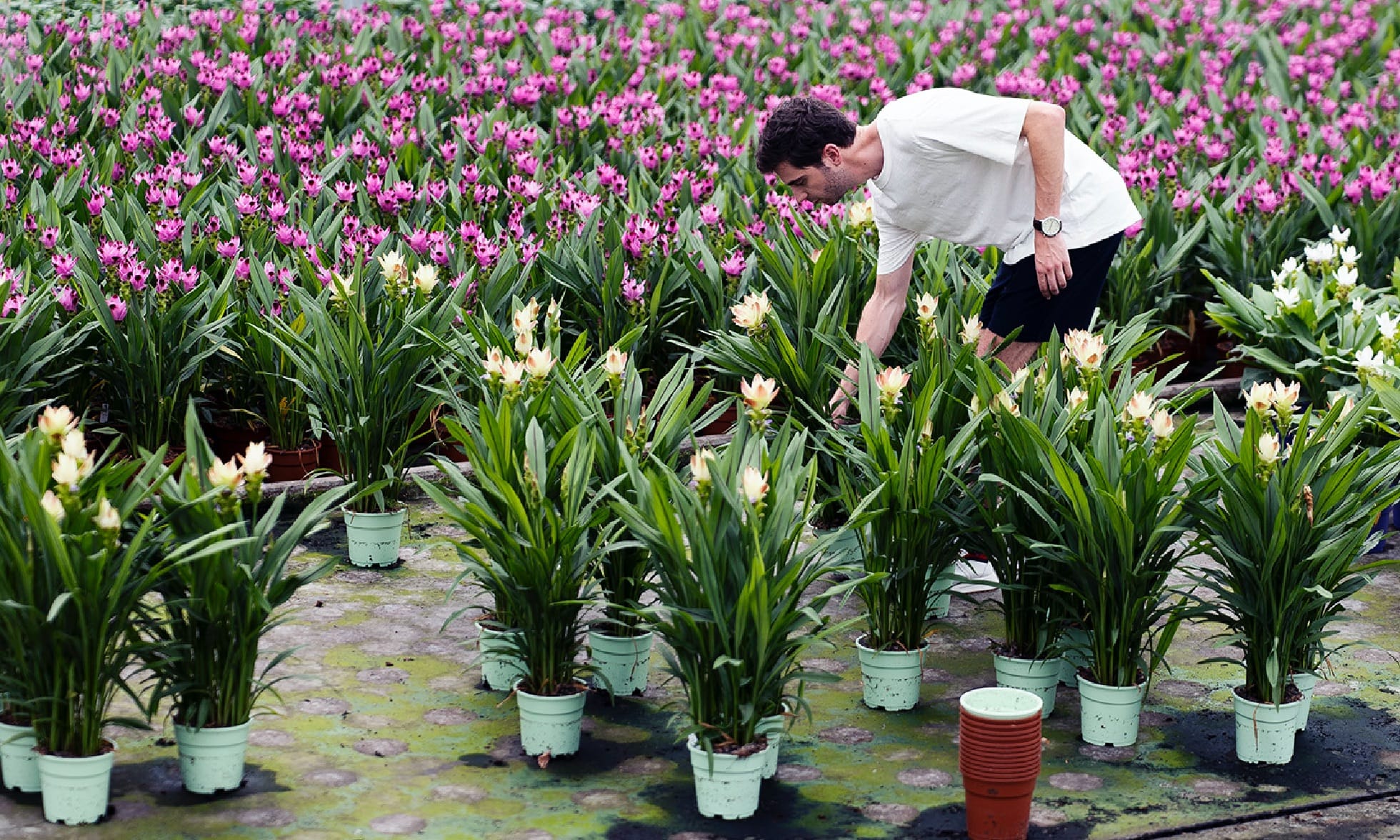 In order to give plants a personal touch and rescue them from their boring image, Axel gives them human names. “Plants have names in Latin, but we thought that it’s better if they were named after people so you can relate to the plant. The pancake plant is named Marco because Marco van Basten once yelled, ‘pancake’. Bob is our cactus, and he doesn’t require much water. We also have a plant named Guus because that name just sounded good.”

And has this approached worked?

“We get emails with stuff like, ‘Guus is not doing well’ or ‘our Marco has issues.’ People also like to share this on social media: ‘this plant has the same name as you!’,” says Axel. “I don’t know if this increases conversion,” he continues, “you can’t measure it in any case, but I suspect it does.” Axel marks this as a unique way for people to come in contact with his brand, an enthusiasm he also sees in reviews of his site. “Recently I read a review where someone spent an hour on our site just looking around reading because he thought everything was so cool, says Axel,” I used to think that people only left reviews when they had something negative to say.” “But apparently our content is hitting the right note and a lot of people want to say that they think what we’re doing is awesome,” he says.

“The pancake plant is named Marco because Marco van Basten once yelled, ‘pancake’”

Reviews like the above signal that Plantsome is on the right path, but there are still many opportunities for growth. “We want to become the largest plant seller in Europe and it’s a fast-growing market. Right now, around 7% of plants are bought online, but we expect that could grow to 25 or 30% within a couple of years, and we’re heavily investing in that growth. We also expect to double our growth in the Netherlands again this year, selling around 50,000 plants, but our biggest challenge lies in figuring out what area we’re going to focus on.”

And where is all this expected growth going to come from?

“Next year we want to expand to Germany, but I think that we need to be, first, firmly on our feet here in the Netherlands. We’re still a startup and we’re still figuring out our identity. If we don’t take of this first, then we’ll go to Germany and make the same mistakes we made here, just on a ten-times bigger scale.” 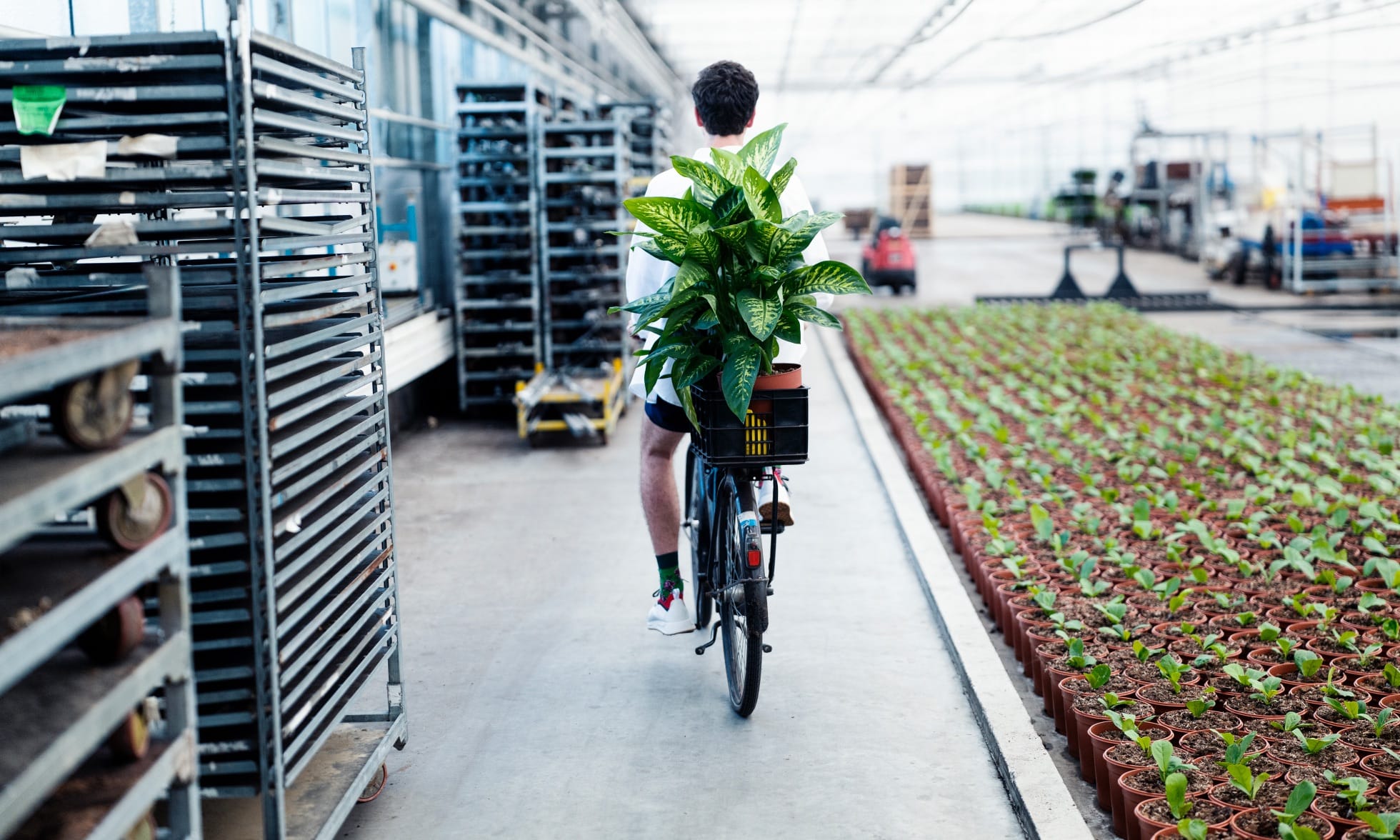 The potential is enormous

“To reach our potential, we have to work on our brand. The packaging we use for the plants is neutral, and a nice design is going to replace that. We also want to add something to the plant itself because once you take off the packaging, it no longer says ‘Plantsome’: it’s just a plant.”

“The app could also use some more work,” Axel says, “lots of people are using it and more continue to use it, even though we haven’t even spent a cent marketing it. It’s also used by people who haven’t bought plants from us, so it can be improved there too, and I believe that people who come into contact with your brand will ultimately buy something. At this point in time the app is a separate platform that’s solely there to communicate when the plant needs care, but if we integrate it into the account environment the potential is enormous. Here, you could get discounts and even buy a plant right inside the app.”

“We haven’t spent a cent on marketing.”

Problems from our own success

To become more successful, Axel’s had to hand over some things to others. “I built the first version of the app myself because I’m a pretty good programmer, but if I wanted to have the company grow to where it should be, I’d have to let it go. The app couldn’t handle all the notifications from the around 25,000 people that all have a couple of plants on it, and we got bad reviews for it. We were focusing on the webshop, where all the money was coming in and the app was growing so quickly that we were having problems from our own success. That’s why we hired someone to take it over.”

“We now work with a digital agency for the app. I tell the team there what to do, but they do the work, that leaves me with the space to focus on growing my company,” Axel says. 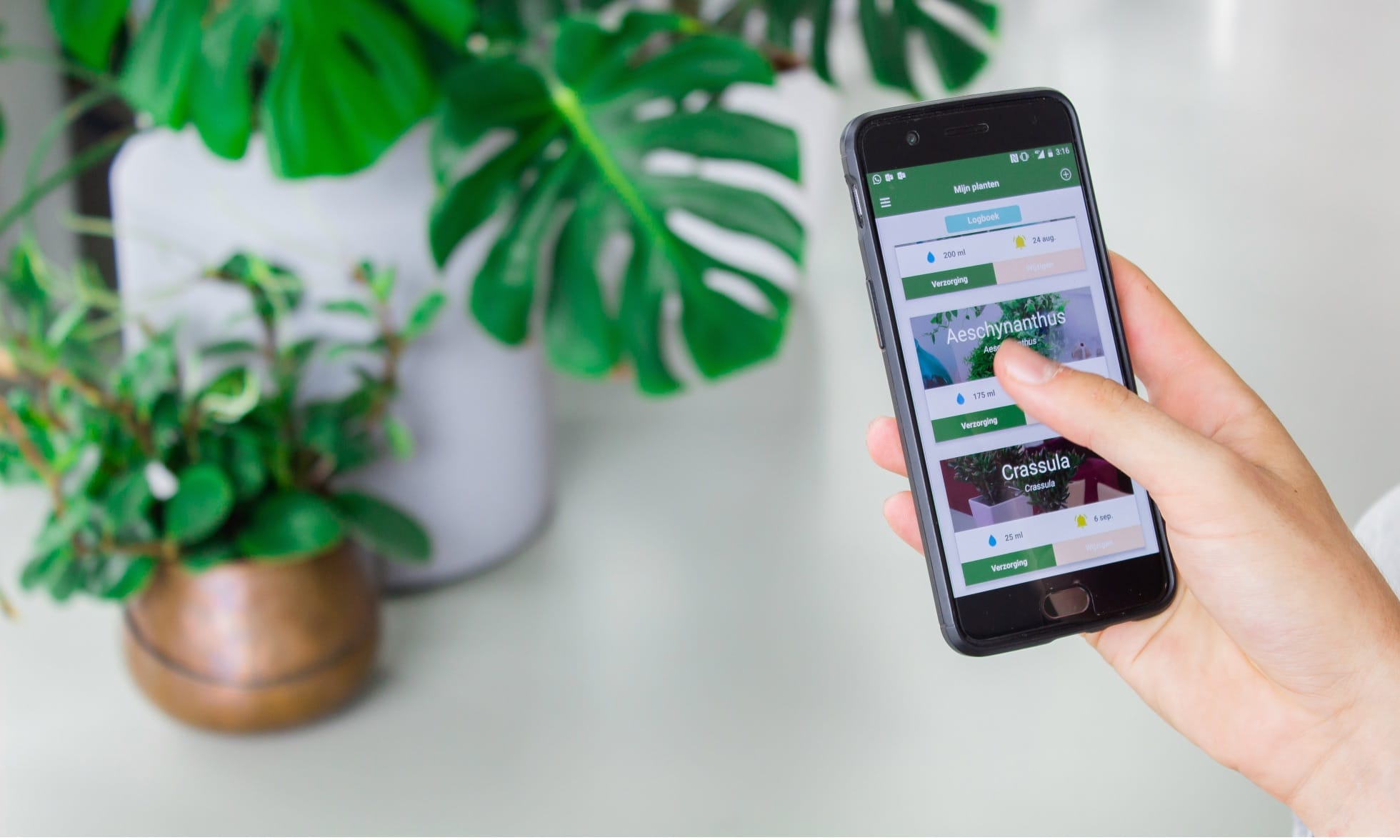 Axel tells the story of how he came to Mollie: “I made the decision to go with Mollie pretty quickly. It was both super simple and developer-oriented, two things that don’t usually go together and I really like.” “I didn’t even consider any other companies because there weren’t easier ways to make the connection I wanted,” says Axel.

This satisfaction with Mollie didn’t end with the initial interaction. “It’s still the case to this day,” he explains, “The Dashboard is well thought-out and it only takes one click to add integrations.” Additionally, when he began looking into Mollie and what the business was, he found, “that’s it’s just a really cool company with a mindset just like ours,” he says, “and you get a clear picture of who they are, you see the people behind the payments. That’s why Mollie was more attractive as a payments provider than other providers.” “You don’t get the feeling that you’re working with some party that’s aloof, but one that’s happy to have you as a client, greets you in a friendly way, and wants to help you,” he says, finishing, “We have many challenges on the horizon as a business, but payments aren’t one of them — I’m really happy in that regard.”

“You get the feeling that you’re working with one that’s happy to have you as a client, greets you in a friendly way, and wants to help you.”