All of Anne and Esther’s dreams come true — whether it’s a collaboration with actress/presenter Chantal Janzen — to pop-up stores in the Bijenkorf, a popular Dutch high-end retail chain. They don’t have a detailed business plan for their webshop, Vedder & Vedder, which specialises in personalised jewellery. “I didn’t ever think that any of this would become a reality,” Anne says, “so I didn’t dare to put it in a business plan.”

Vedder & Vedder is now a serious company counting 26 women in its ranks, and now that it’s conquered the Netherlands and Belgium, has set its sights on Germany. The expansion dreams don’t stop there: “I’d like get into the American market. A flagship store in New York would really be something,” says Anne. If what’s happened up until now is any indication, then it’s highly likely that this dream will too be fulfilled. And what’s extra special is that all the success they’ve built has been without external financing.

“I didn’t ever think that any of this would become a reality.” 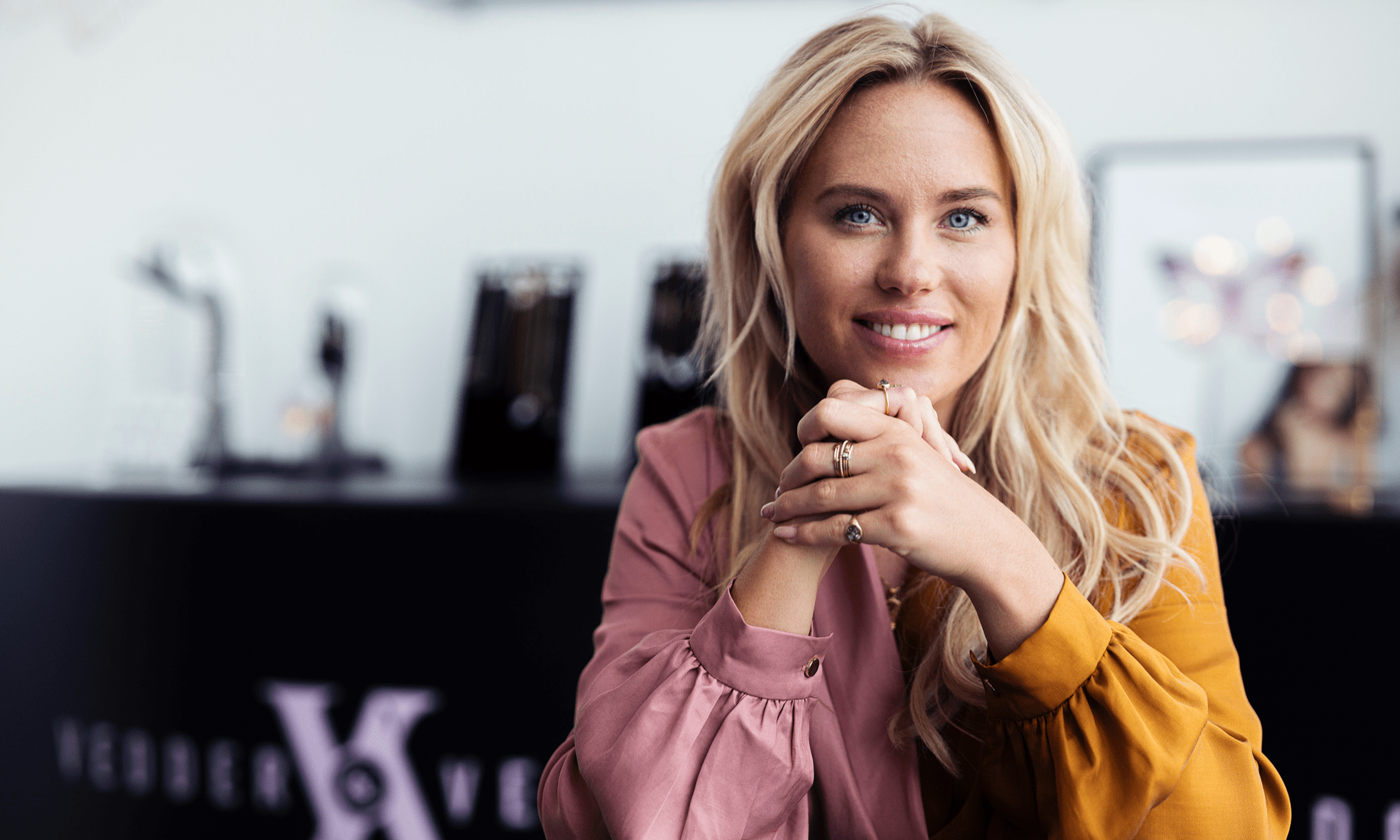 “When the webshop’s up and running, then things will really get moving”

Success didn’t come easily for Esther and Anne. “We rented an office with glass walls and you could write on these walls,” Anne says, “We put a line on the wall for every sale we had, and we agreed to pop some champagne once we got to 100.”

She continues that, “The first two months we thought: When the webshop’s up and running — then things will really get moving. At one point in time the shop had been up for a while and I asked my sister — ‘did you forgot to put the lines on the wall?!’; She hadn’t — we didn’t have any orders. ‘What did I get myself into?,’ I asked myself. I think it was then I realised that once you’ve been through some hard times, then you’re ready to put in the work it takes to get where you want to be.” 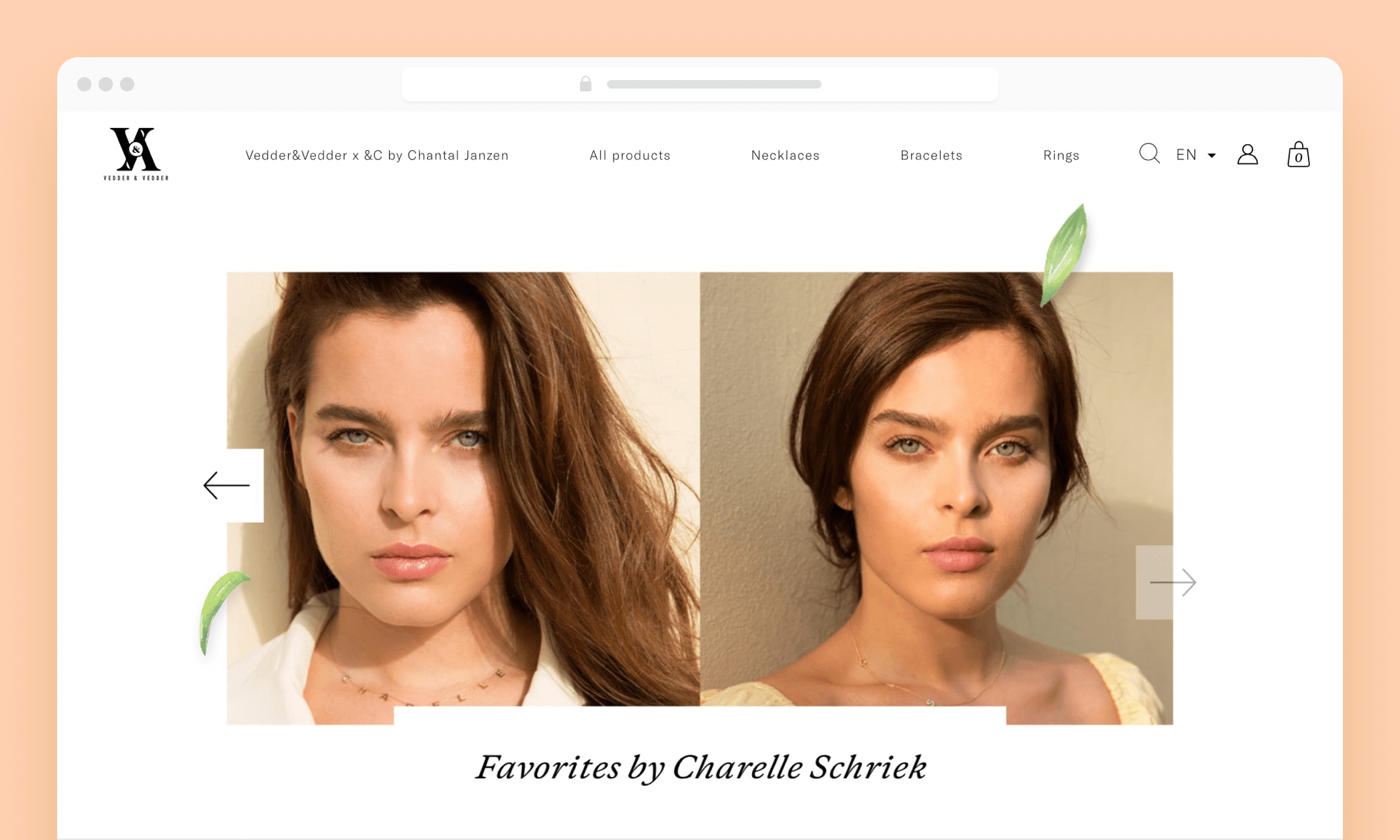 When success still hadn’t come and the sisters were wondering if the competition was lurking in the wings, they had a game-changing brainwave.

“We were looking at the Instagram of a Dutch celebrity and we saw their kid’s first written word, Anne says, “and then we decided to put that word on a piece of jewellery and send it to her as a surprise.” Although stars like her get sent a lot of stuff, this was a personal surprise that she hadn’t counted on, so she took to her Instagram and Facebook accounts to share the unexpected delight with the world.

“Within two weeks Victoria Koblenko, Carice van Houten, and Chantal Janzen had posted on social media about what we had sent them,” says Anne, and that’s when things really started to roll. “At that time we thought three orders per day was a lot, but that quickly jumped to ten, and now we’re doing around 900 orders every day.”

“At that time we thought three orders per day was a lot.” 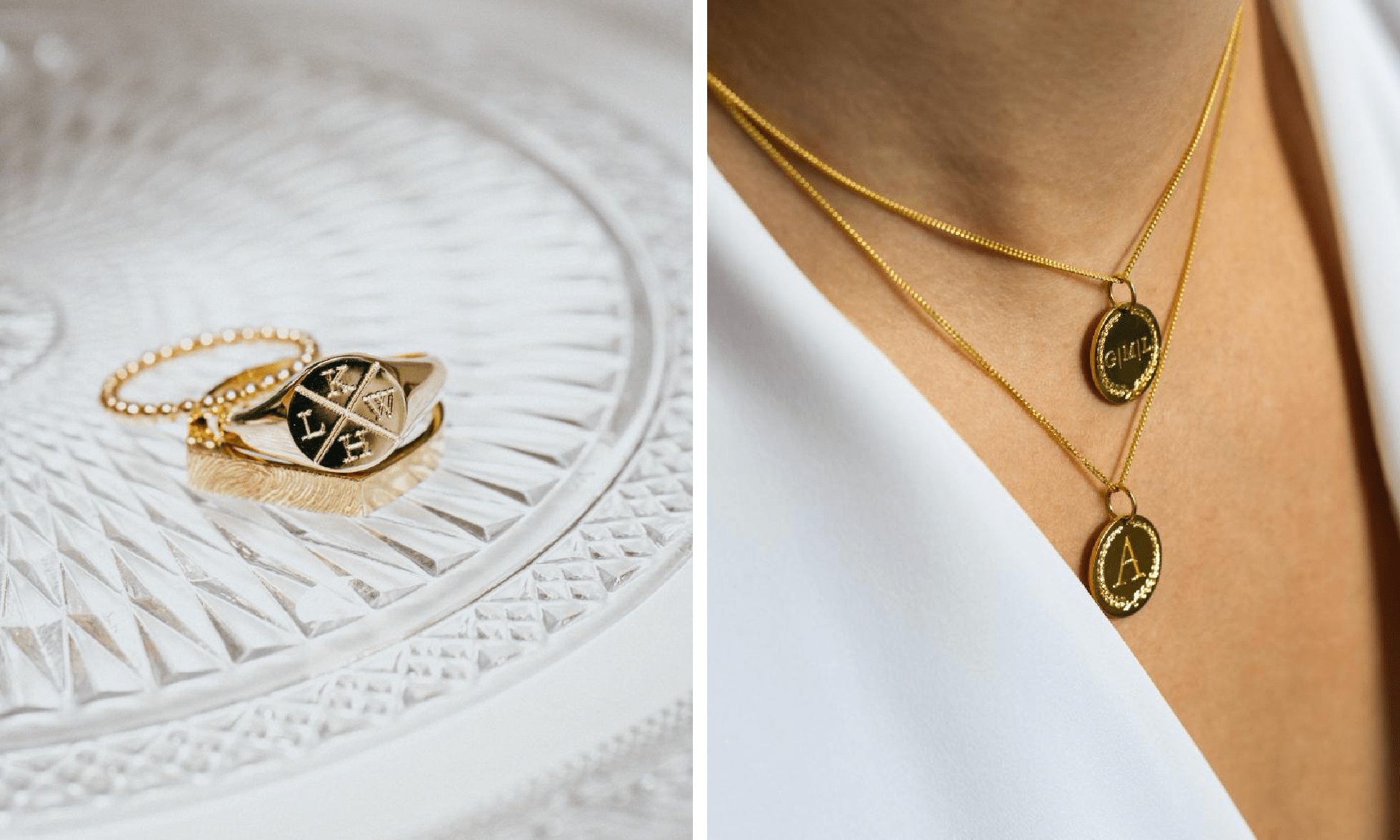 Hard to do a good job

In order to handle the new growth, Vedder & Vedder had to do things differently. “At first we produced all of our items outside of the Netherlands, which took about ten days in all to deliver,” Anne says, “and then you get a call from a man, because men are always late with gifts, asking if you can get it to them faster, but we couldn’t.” — “Then we did some research on what machines the company that made our items was using and then we bought one of those machines for ourselves. I did the engraving and then Esther put everything together.”

“And we did a lot of experimenting with machines, even though we didn’t have the foggiest idea about this type of thing,” says Anne. “At one point in time we bought a gilding machine and that’s a chemical process where it’s hard to do a good job. After the 80th time the jewellery was still coming out looking like it was deep-fried, and that made us aware of just how important quality was for our clients.

That’s when we took on our first goldsmith and she optimised all of the processes, and she still manages all of this here.” 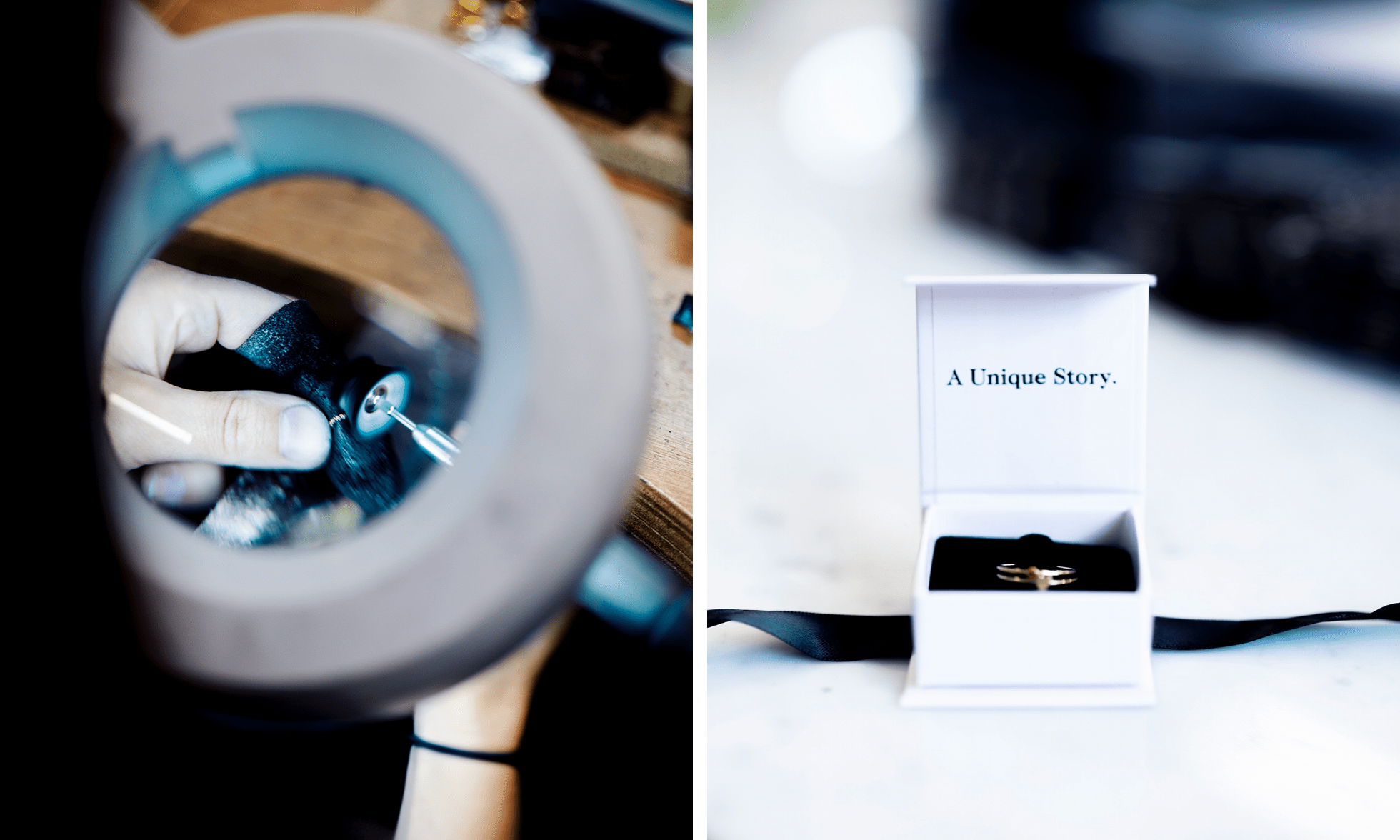 “Now, we have a bunch of goldsmiths on staff and we have all sorts of machines that you’ll only see in a few other places in Europe. We’re busy innovating and our goldsmiths are up-to-date on all the latest developments coming out of the US, which is a frontrunner when it comes to that sector. We test new things immediately and because of that we develop really quickly, and we also focus on our internal process so we can scale up operations during busy periods without our products losing quality, ” says Anne. 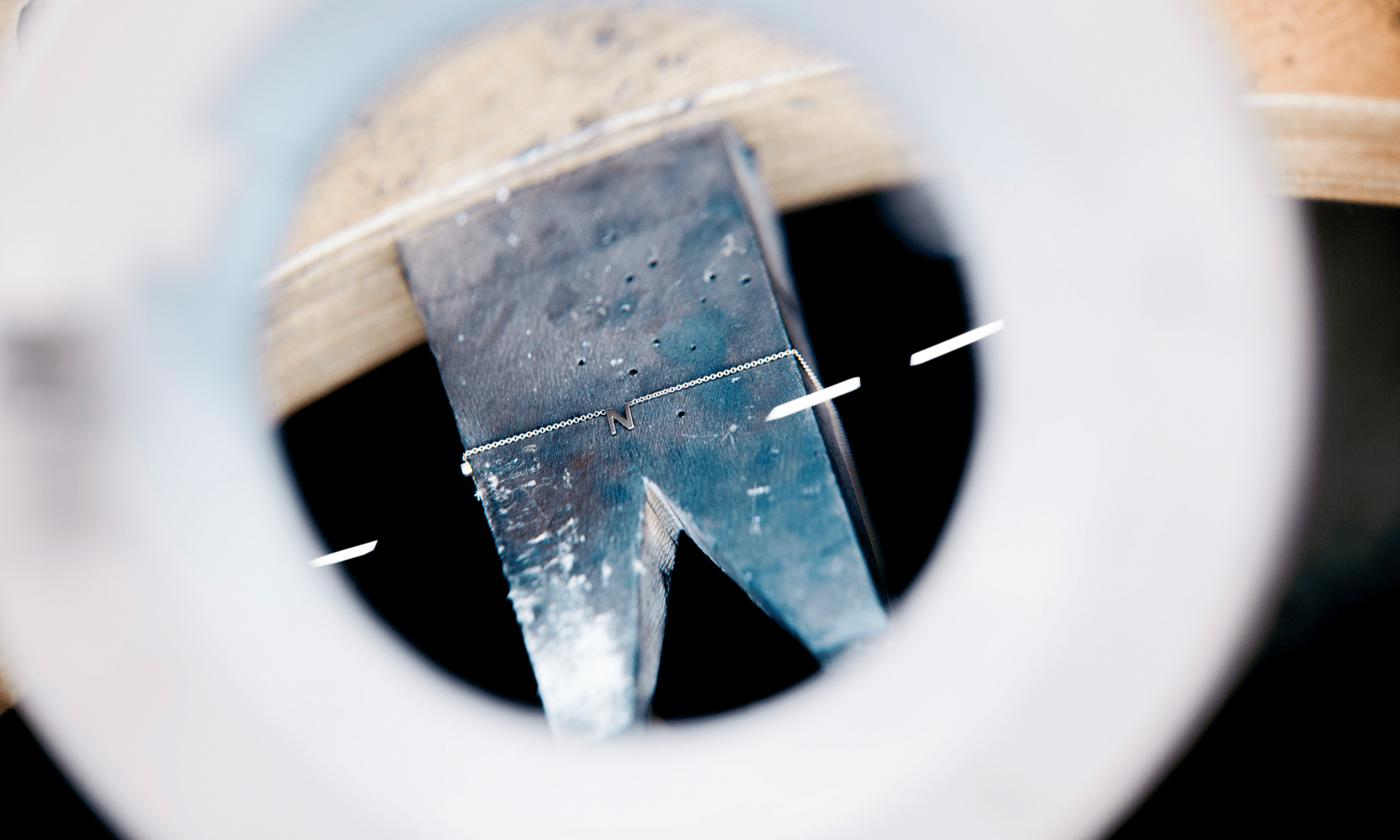 This is necessary due to how busy it gets at certain times of year. Anne says that, “Around Christmas, Glamour Day, or Black Friday we process just as many transactions in one day as we normally do over an entire month. And don’t forget: nothing ever sells out because everything is custom and personalised, so we don’t have an inventory waiting to be shipped. You always had to offer the same delivery times, even when it’s super busy. Up until now, we’ve been able to get everything out in time and when it comes to this, we use the Mollie Dashboard and the stats there to help anticipate what’s coming. In the Dashboard, you can easily compare results.”

“Thanks to Mollie, we know when the busy days are coming and what we can expect. We’ve been with Mollie since we opened shop, and we continue to be surprised each year by the results of, for example, Glamour Day. People really wait for this day because we don’t normally offer discounts,” Anne finishes. 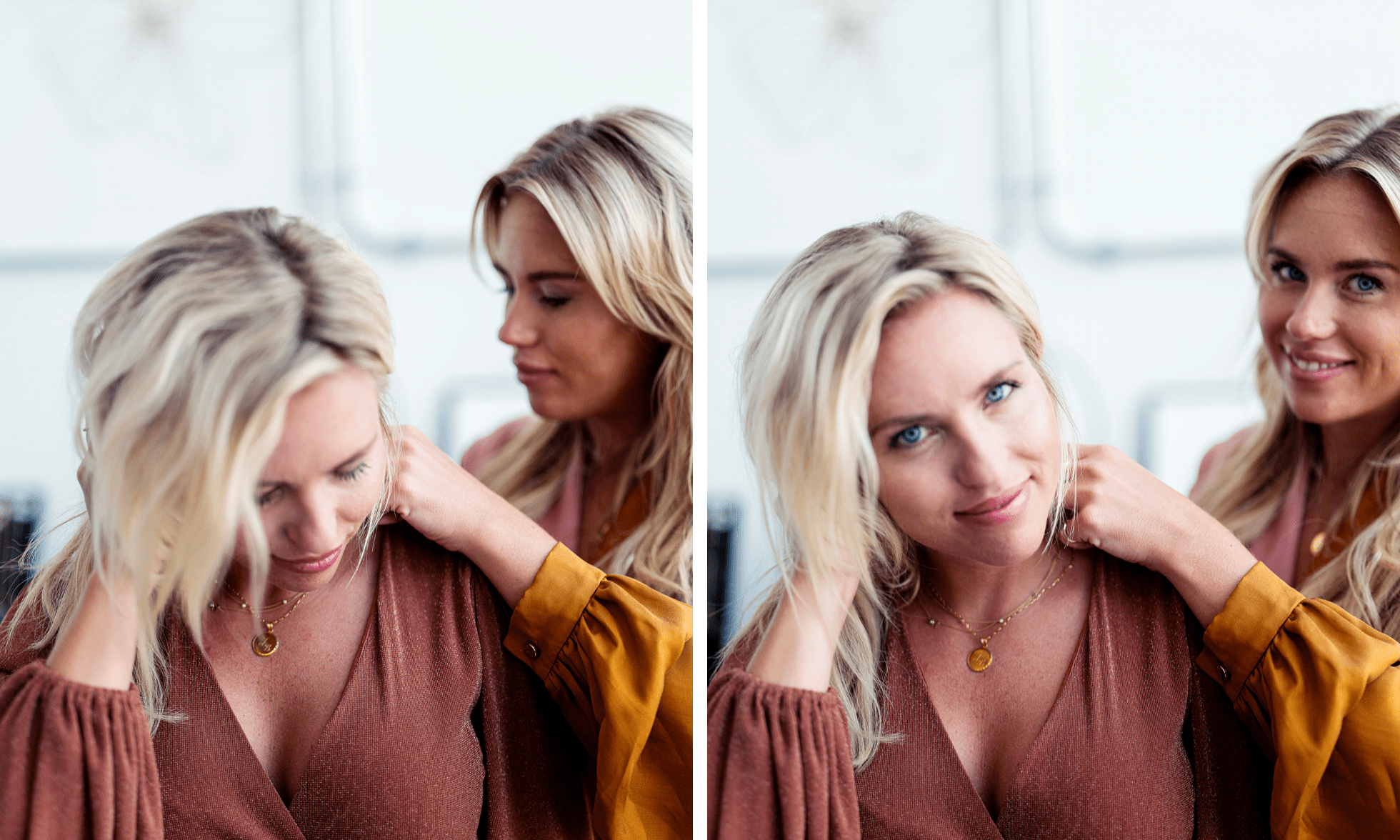 “And I check the results in one go. We’re addicted to Mollie. I look at the Mollie Dashboard around 80 times a day, and I like to keep checking in on our profits. When we first began, with each new transaction we said: there’s another Mollie!” offers Anne.

If anything ever goes wrong at Vedder & Vedder, they know immediately what’s going on. “On the weekend after Black Friday, it wasn’t clear if all the orders had been paid. We were sitting there with a whole team of goldsmiths that couldn’t do their work, and I was super upset about that so I took that attitude and began calling and emailing customer service.”

What happened next was certainly a surprise.

“On Sunday morning Adriaan Mol (ed–Mollie’s founder) called me, and I explained everything and then he dove into it himself. The fact that he wanted to put the work in over this strengthened the connection with Mollie. We’re good at jewellery and coming up with ideas, but we’re not developers. Thanks to Mollie, we don’t have to spend our time with that type of thing, it just works well.”

“With each new transaction we said: there’s another Mollie!” 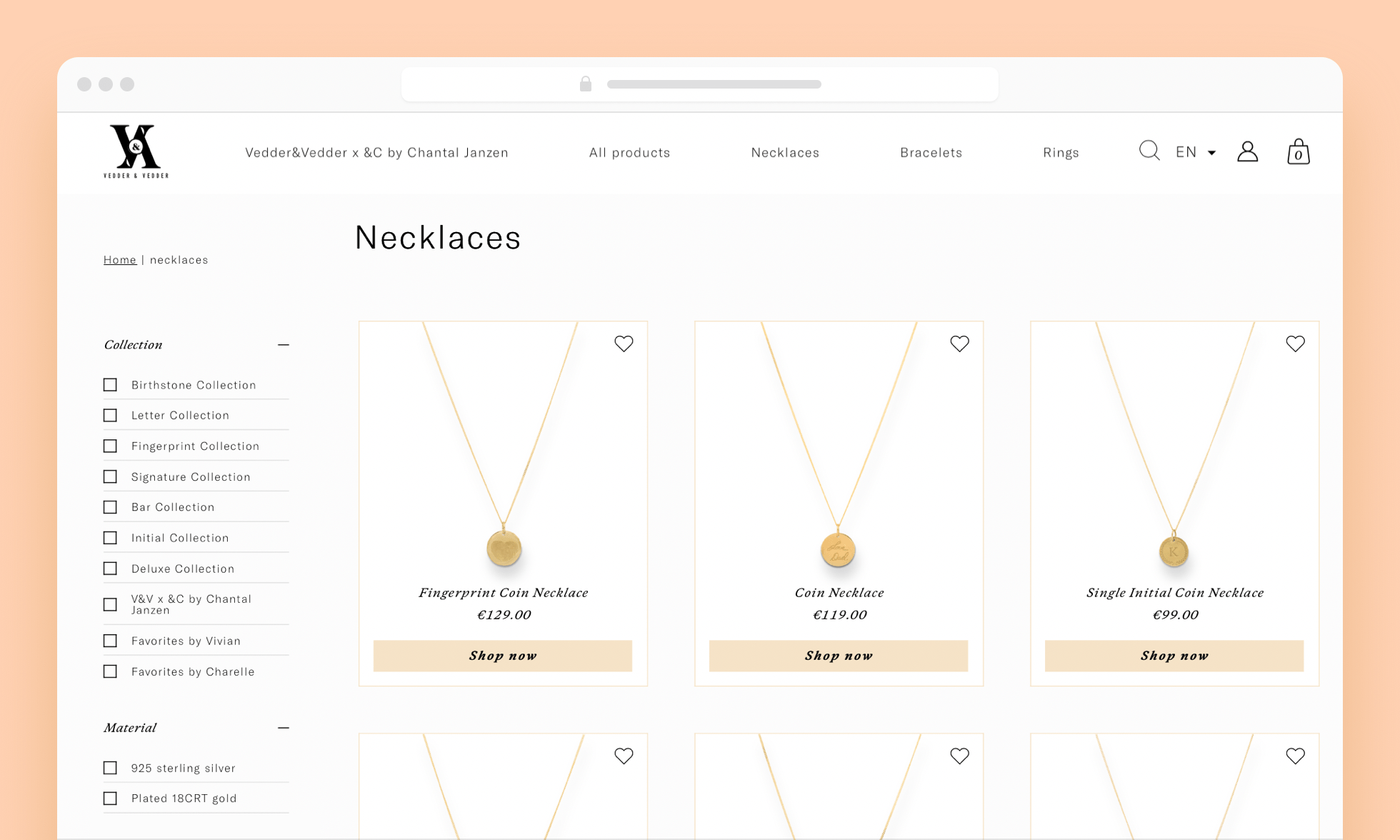 “It was a huge surprise when the buyer from the Bijenkorf emailed us,” Anna says — explaining — “A few months before we got the email Esther was reading The Secret and wrote down having a pop-up store in the Bijenkorf as a goal.” When we got the actual email from the Bijenkorf, she thought I was playing a joke on her. Now, during times like Christmas, Mother’s Day, and Valentine’s day we have pop-ups in that store across the country where you can see how we make your jewellery. The Bijenkorf takes a percentage of what we make, so we mainly do it to get our name out there. A lot of people think that if your products are sold at the Bijenkorf, then you’ve got a good brand going on.” Anna also says that, “it’s really cool to see how we get busier and busier year after year, and because of this we think of opening our own store, but our focus on 100% online.”

“In 2020, we want to be up and running in Germany,“ Anna continues, and when it comes to dreams the sister’s still haven’t fulfilled, Esther steps in and tells, “We also want to deliver personalised jewellery in Germany to famous people, for example having Heidi Klum sport our stuff would be amazing. If we went to the US, Michelle Obama would be the perfect woman for Vedder & Vedder.”