SMEs in the UK used to find it easy to sell online and ship goods to customers across the European Union. When your EU customers placed an order, your UK warehouse fulfilled it and your goods moved across the border in a timely and efficient manner. No hassle, no worries and little in the way of extra costs.

That all changed at the end of 2020 when the UK left the EU Single Market and customs union. The Brexit reality of customs duties, EORI numbers and VAT changes, with extra paperwork, increased costs and longer delivery times is creating tough, new challenges for small businesses.

As a result, many are looking at setting up in an EU country, such as the Netherlands, to avoid the hassle and ensure they can still offer their customers a great service.

Make a home for your business in the Netherlands

The Netherlands Foreign Investment Agency (NFIA), part of the Dutch Ministry of Economic Affairs and Climate Policy, helps many of these companies building the business case for the Netherlands and finding their feet when landing in Holland. “The number of British companies searching for a base in the Netherlands has doubled over the last 18 months,” says NFIA’s Executive Director in London, Ties Elzinga.

The NFIA is part of the Invest in Holland Network, where the NFIA, together with 13 regional and logistics partners helps out companies finding a Dutch base. “Right now, we’re talking to around another 550 companies specifically about setting up branches, depots or distribution operations in the Netherlands because of Brexit.” says Elzinga on the volumes of questions Invest in Holland is receiving.

A separate operation in the Netherlands means businesses don’t have to deal with border issues or extra charges, paperwork and tax. They can distribute their goods across the EU Single Market in much the same way as they did before Brexit.

Here are 5 more reasons why the Netherlands could be the perfect solution for UK e-commerce companies:

The Netherlands is at the heart of Europe and well known for its excellent infrastructure. Rotterdam has the largest port in Europe, Schiphol is an award-winning international airport, and our strong road and rail network makes other European countries easy to access. As a business, that means you can reach the 500 million customers in all corners of the EU single market – from Rome and Madrid to Stockholm and Warsaw – within 24 hours. 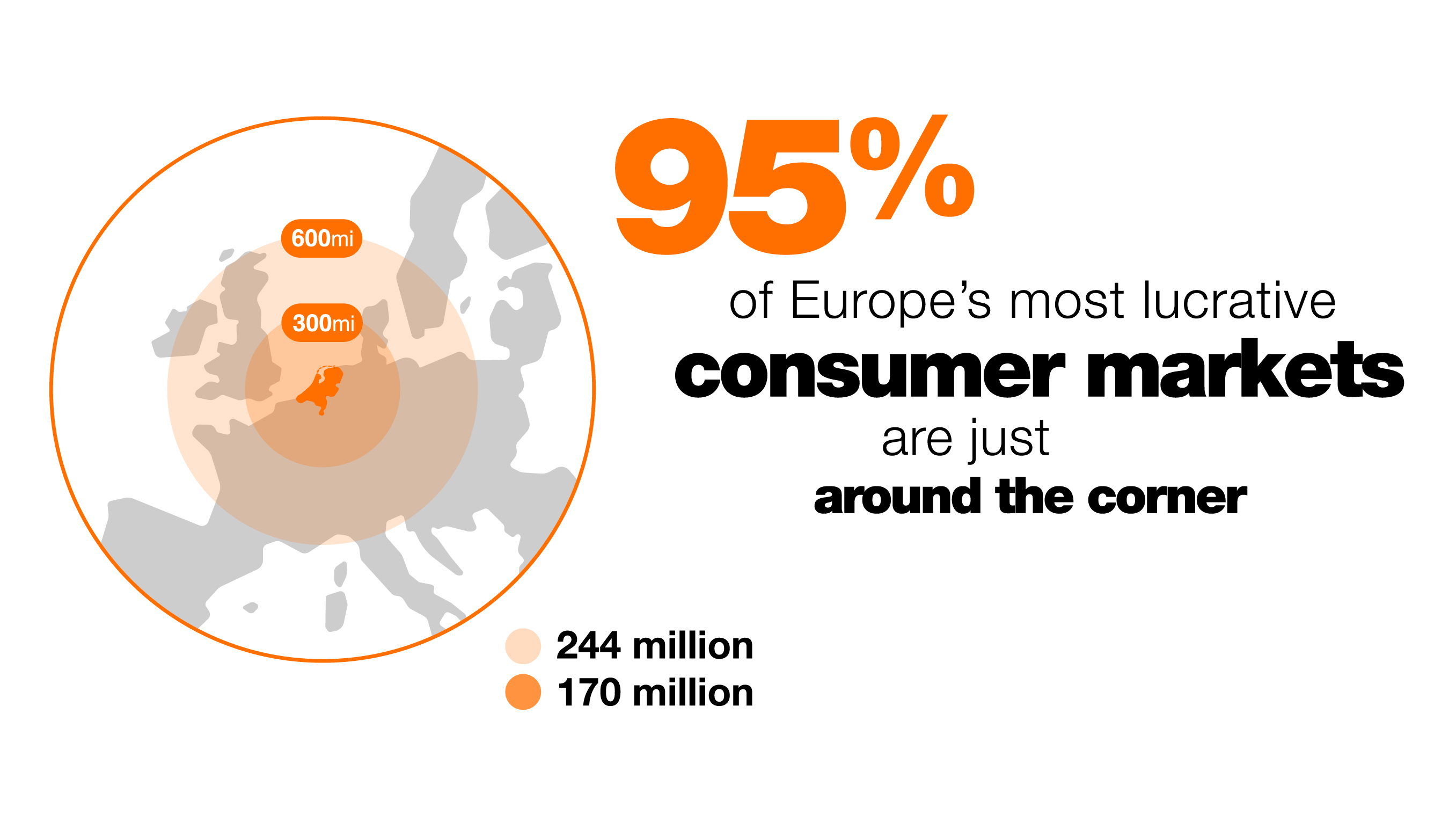 Did you know that the Dutch are the best non-native English speakers in the world? That’s according to the EF English Proficiency Index (EF EFI) which examines English-speaking capabilities across 100 countries. As over 90% of the Dutch speak English, there won’t be problems understanding each other.

3. You’ll be in good company

Many of the big, international retailers (including Tommy Hilfiger, Asics and Patagonia) have established their European operations in the Netherlands. But innovative UK SMEs, such as Snag Tights, Monster Group and Candy Hero, have also found a warm welcome here. A common theme is that the Netherlands is the perfect location from which to serve all their European customers.

Yorkshire-based Monster Group was an early Brexit mover to the Netherlands. They set up their European distribution centre at Venlo, just a few miles from the German border, in 2019. “Moving early to get ready for Brexit gave us peace of mind,” says Monster Group’s MD Rana Harvey. “Now, all our European deliveries are shipped direct from Venlo. We’re servicing customers in the Netherlands, Germany, France, Italy and Spain, and we can guarantee next day delivery across Germany and the Netherlands.”

Scottish retailer Snag Tights has also opened a distribution centre in Venlo. “Our business has grown and thrived thanks to the support of customers from the EU and around the world,” explains Founder and CEO Brie Read. “With all the uncertainty surrounding Brexit, we just knew we had to find a solution to continue to deliver our products to Snaggler’s everywhere.”

Brothers Frank and Leo Dillon launched Candy Hero in 2008, importing confectionery from America and Japan to sell to customers in the UK and the EU. With a customer base split 50:50 between the UK and the EU, they decided to set up a warehouse in Nijmegen, the Netherlands to continue to serve European customers.

“Our business depends on a frictionless customer experience,” says Frank Dillon. “Now, all the goods we import can be sent directly to either the UK or the Netherlands. That offers huge customer benefits. Even without Brexit, opening in the Netherlands would still be worthwhile because it enables us to run a lean supply chain, price competitively and maintain margins.”

According to the United Nations Happiness Report, the Netherlands is one of the happiest countries in Europe. The OECD also reports that the Dutch have the best work-life balance in the world. The country has a reputation for being cosmopolitan, as well as safe and stable, with excellent education and healthcare and an efficient, collaborative business culture.

“We love the Dutch way of life,” says Rana Harvey of Monster Group. “It’s such an open and forward-thinking country. And, that’s a perfect culture fit with our own fun, dynamic company values.”

5. They’re ready to welcome you

For many SMEs embarking on an international expansion, the most difficult part is knowing where to start and who to talk to. That’s where the Netherlands Foreign Investment Agency (NFIA) and partners can help.

They offer free, confidential advice on everything from setting up a Dutch business and finding premises, to opening a business bank account and recruiting the right team or business partners.

Also valuable is their offer to introduce UK SMEs to partner organisations across the Netherlands. The Holland International Distribution Council (HIDC)) for example, can advise on finding a logistics service provider if you’re not quite ready to commit to setting up your own operations in the Netherlands.

Remco Buurman, CEO Holland International Distribution Council: “Since October 2020 we’ve been overwhelmed by requests of more than 100 British companies looking for logistics solutions for their European customers. Besides supply chain advice and matchmaking with logistics service suppliers we have also assisted them with regulatory, tax and legal implications of trade with the EU by connecting these companies to a range of specialists.”

And that’s a wrap on the interesting trend of UK SMEs setting up shop - or part thereof - in the Netherlands. Thanks to Liz at the NFIA for the write up.